To celebrate the 20th anniversary of the Singing Quilter,
ALL QUILT-RELATED CDS AND BOOKS
ARE NOW 50% OFF!!!

To order the CDs below from me click ADD TO CART.

Featured songs are “Treat it Right”, “You Just Might be a Quilter”, “Quilt of Belonging” and “Panguitch” (a piece of Mormon history).

Also “Little Crazy Quilt” (from the Patti Page songbook), “Martha” (about a quilt made by a freed slave in Liberia for Queen Victoria), “Two Peas in a Pod” (John’s solo), “Buzzing at the Bee“, “Midnight Knitters“, “Dance Beneath the Moon“, “The Oak Leaf“, “The Sewing Machine” (from the movie “Perils of Pauline” in 1947), “I Remember You” (written for Ami Sims’ Alzheimer’s Art Quilt Initiative), “Duncans Cove“.

Featured songs are “Shop Hopping” and “Why Don’t You Have Plain White“.

Also: “One Pot of Soup“, “The Duck Neck Quilt” from Alaska, “How Do You Build a House?“, “Boots and Bayonets” (WWII commemorative quilt made for Burlington Teen Tour Marching Band), “My Grandfather’s Brother“, “Done is Better than Perfect“, “The Quilt Teacher’s Life“, “Paducah” (about a suicide quilt that saves someone’s life), “No Such Thing as an Ugly Quilt“, “Like Needle and Thread”, and “Masterpiece“.

2004: A Quilter’s World a whopping 16 songs, including “You Can Quilt That Out” about longarmers, and “Sweaters for Penguins” about knitting.

Also “12 Step Plan for Quilters“, “I Need Another Wagga“, “The Patchwork Quilt“, “Stitching in the Ditch“, “When the Boys Were Thirsty“, “Quilt of Names” (about a WWII Canadian Red Cross quilt that came home), “Cats“, “Peshtigo Fire” (a Wisconsin history story), “Star and Plume“, “Lullaby“, “Give and Take“, “Seeing Nellie Home“, “Make me a Quilt”.

Also “Quilter’s Alphabet“, “A Quilt for Gran“, “The Trapper and His Bride“, “Prince Charming“, “A Quilter’s Embrace”, “Old Glory” (about the original flag and the quilt that kept it safe during the Civil War), “Before I was a Quiltmaker“, “When I Die“, “A Quilt and a Kettle” (about a quilt made on the Oregon Trail), “Nine Months“, “Frog Stitch“, “Healing Hearts“, “My Hands“.

2000: One Stitch at a Time  the first CD of songs about quilts, quilters and quilting.

1999: Living for the Stars  acoustic swing with a whole lot of fun! The last full-length CD before Cathy took up quilting songs full-time.

Songs include: “Take a Break from Love“, “Goodnight Irene” (with new verses written for my mother), “Cumberland“, “God Bless the Backhoe“, “Falling for Me“, “Whirlpool of Love“, “My Funny Valentine“, “Say It Out Loud” (co-written with David K), “Swing Geezers“, “Star Light“, “Living for the Stars“, “A Million Miles Away“, “Now There Is No Rain“.

I am sorry to say this recording is no longer available from me.  Try downloading it from: https://www.amazon.com/Two-Thousand-Years-Christmas-Trilogy/dp/B004IWKU24 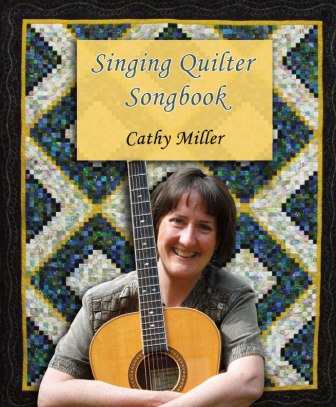 For years, I had the dream of putting all the stories of my songs down in one place, so they could continue to inspire quilters.  I’m  always asked if the stories are on the CDs.  We don’t record them because they change as I get more information about each one, and there’s only a little bit of room on the CD booklet for explanations.

After the release of Quilting CD #5 (Little Crazy Quilt), I felt it was time to change that – time to collect everything I’ve learned in one place.  This includes quite a few of the best stories people have told me AFTER I’ve written the songs.  Quilting tidbits that have become part of the fabric of the songs for me, but that I don’t ever have time to tell.

While I was at it, why not include the scores of the songs, just in case people want to sing or play along?

So — here it is!  68 songs that I’ve recorded since I became the Singing Quilter in 2000.  How I play the chords, the melodies, all the lyrics, stories, photographs and other fun stuff I’ve gathered over the years.  There are even a few patterns: notably, the knitting pattern for Sweaters for Penguins, How to Make a Crazy Quilt, the Quilter’s Delight block instructions, the Double Anchor block (from “My Grandfather’s Brother” signature quilt) and a few ideas on how to use scraps.

If you’re a fan of my work, this is an exciting addition to your collection!

“The songs have become even more meaningful now that I understand the back story.
I am really happy to have this book:+))))”
Rosemary in Lebanon, PA